From Heraldry of the World
Your site history : Merchants House of Glasgow
Jump to navigation Jump to search 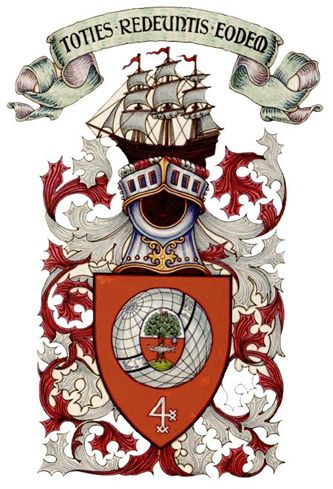 Gules a terrestrial sphere Argent, encircled by an equatorial band cotised Sable, charged with the signs of the Zodiac of the Last, en surtout an escutcheon parted per fess Argent and Gules, from a mount in base an oak tree the stem surmounted of a salmon on its back with a signet ring in its mouth, on the top of the tree a robin red breast and in the sinster fess point an ancient handbell all proper, in base below the sphere a merchant's mark resembling the figure 4 of the Second.

The arms were officially granted in 1912.

The principal charge of the Merchants' coat of arms is essentially a globe of the world with the Trades House arms on it— the latter being itself a slightly differenced version of the arms of the City of Glasgow.