From Heraldry of the World
Your site history : Metropolitan Chapter of Saint Wenceslas in Olomouc
Jump to navigation Jump to search 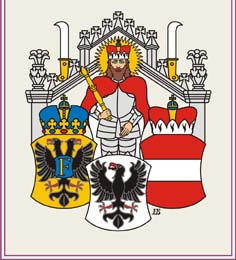 From the 17th century the chapter has used a figure of St. Wenceslas in plate mail with a red cloak, crowned with a ducal crown before a golden halo. In his right hand is a golden scepter. Before him are three shields. Directly in front of him, covering his legs from the knees down, is a silver shield with a black eagle displayed, armed red, likely the St. Wenceslas Premyslid eagle, missing the flames. To the right is a golden shield with a double-headed black eagle, armed red, with a blue inescucheon with a golden letter "F". Atop the main shield is an imperial crown. This is likely the imperial eagle. Lastly, to the left of the central shield is a red shield with a silver bar across it, topped with a ducal crown. This last shield is the coat of arms of the Austrian Habsburgs. Both side shields are slightly above and slightly behind the central shield. Behind the figure and the shields is the facade of a three-isle church with the central isle above the two side isles and decorated with seven crosses pattée. The each of the side isle roofs is decorated with two crosses pattée and between them a silver, gold-hilted wine pruning knife from the arms of the Dietrichstein family. Both knives are facing away from each other. On the edges of the side roofs are decorative vases.

Previously the chapter used a simplified symbol in their seals showing the figure of St. Wenceslas in Gothic clothing, belted around the waist. In his right hand a scepter, his left reaching down to hold a Gothic shield with an eagle, likely again the Premyslid eagle. The figure is placed inside the central arch of a three-isle Gothic church behind a rectangular base. Some literature describes this structure as a "Gothic throne".

Literature : Images and info from here.