From Heraldry of the World
Your site history : Metropolitan Water Sewerage and Drainage Board (Sydney)
Jump to navigation Jump to search 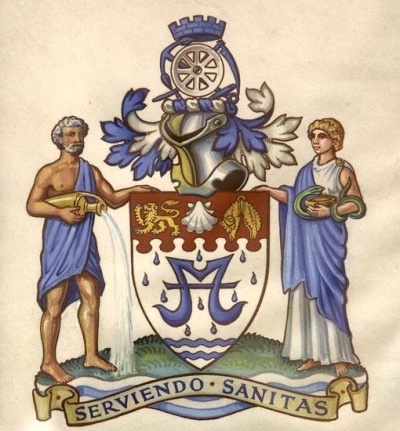 Arms : Argent Gutty, a Water Bouget and in base two Bars wavy Azure, on a Chief nebuly Gules an Escallop Argent between a Lion passant and a Fleece Or.
Crest : On a Wreath of the Colours, in front of a Pick and Scythe in saltire ensigned with a Mural Coronet Azure, a Wheel Argent.
Supporters : On the dexter side a figure representing Aquarius proper habited Azure, and on the sinister side a figure representing Hygieia proper vested Argent cloaked Azure.
Motto: 'Serviendo Sanitas'.

The nebuly partition line of the chief is intended to represent clouds, whence come the drops of rain blazoned 'goutty'. These, emblazoned in groups of three, represent the Board's three major catchments; the water bouget the Board's works of water supply, emphasizing storage; and the two wavy bars the sea to which the water is discharged via the sewerage and stormwater systems.
The escallop in the chief derives from the Arms of Sydney, which incorporate those of Thomas Townshend, Viscount Sydney, who was Secretary of State for the Colonies at the time of the First Fleet; the lion and fleece are from the Arms of New South Wales, as an acknowledgement of the Board's legislative origin.

The Crest depicts the nature of the community the Board serves, the wheel representing manu­facture or industry, the anchor (blazoned as a pick) the three ports (Sydney, Botany Bay, and Port Kembla), and the scythe the outer rural areas. The mural crown indicates that the board is a local government body.

The Supporters represent the Board's functions of water supply (Aquarius) and sanitation (Hygeia), and, reversed, are derived from those of the Metropolitan Water Board in London.