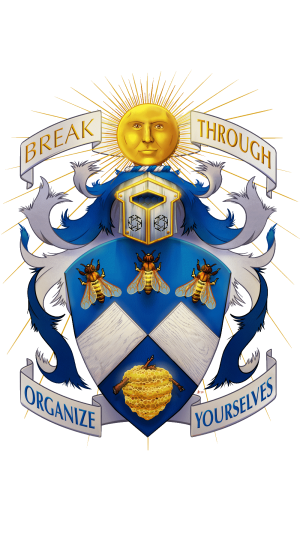 Blazon: Azure, a chevron burst Argent between in chief three bees in fess proper and in base a beehive Or.
Crest: The sun in his splendour Or.
Motto: "Organize Yourselves".

The components of the blazon relate to the armiger's faith, home, family, efficient industry, and working together in an organized way to build up their home. The chevron represents them as a builder (of minds) who has accomplished work of faithful service (terminal degree and lifelong work in education). The chevron as an architectural element refers to establishing or building a house. As a burst (or broken) chevron, it also serves as a reminder to be humble— the armiger is a work in progress (broken heart and contrite spirit, C. S. Lewis quotation “Imagine yourself as a living house”). The chevron also is visually reminiscent of an open book (learning), a bridge (a metaphor for mediating between extremes in the armiger's field and in life), and mountains (where their family and they them self live). The burst chevron and the beehive also subtly form the letters of the armiger's monogram (MAO—a visual cant). The three bees represent he armiger's three children, three university degrees, and three work places. The overall colours, in addition to representing the values listed above, represent at least one colour from each of the universities where the armiger has worked.

Verious other emblazonments can be found [here].

Registered with the International Society of Commoners Heraldry.