From Heraldry of the World
Your site history : Heath Scott > Michael Eric Oettle
Jump to navigation Jump to search 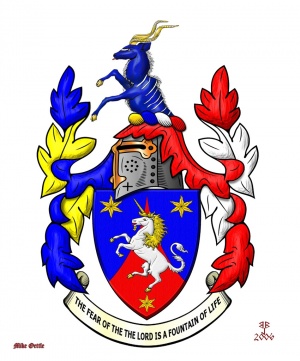 Arms: Gules chapé ployé azure, overall a unicorn clymant argent, armed, crined and unguled or, langued gules, between three estoiles or. Torse: Or, azure, argent and gules. Mantling: Dexter or and azure, sinister argent and gules. Crest: A demi-kudu issuant azure, attired and unguled or, langued gules, striped argent. Motto: The fear of the Lord is a fountain of life.

An adaptation of the arms traditionally borne by Oettles (as family arms) in Germany. For more information, see: www.geocities.ws/skildsoom/OettleE.html