From Heraldry of the World
Your site history : Miguel Graber de Lima
Jump to navigation Jump to search 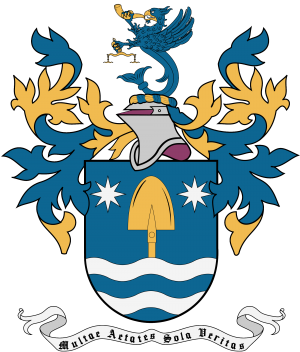 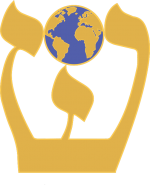 Azure, a spade Or issuing from a ford proper, in chief two mullets of eight Argent. For a crest, a sea-griffin segreant Azure beaked and armed Or, blowing into a shofar in his dexter and maintaining in his sinister talon a scale, both of the second. For a motto: "Multae Aetates Sola Veritas".

Badge: The Hebrew letter Sin Or, its middle stroke shorter to accommodate a globe Azure, the continents of the first.

All the elements represent some form of canting. The ford represents the Lima river in Portugal, where one side of the armiger's family comes from. The spade alludes to their Jewish surname, which comes from German "Gräber", meaning "digger", while the stars reference their third surname (not registered on birth), "Splendore". The shield arrangement represents the armiger's most important ideal: hardworkingness. Independent from an individual's origin, universally just as water is universal to the world, they can reach the stars through this trait, represented by a golden shovel. This charge also alludes to the armiger's principle of tradition, as burying the dead is both a core principle of their religion and a representation of the cycle of generations, an idea also remembered by the motto, which translates to "multiple generations, one truth". The world "generations" as a whole is very important to the armiger, seeing that it's their religious youth group's name. The crest's upper part represents their desire for personal and general freedom, while the lower part alludes to the famous dolphins presented as supporters on their city's coat of arms. Finally, the shofar represents the armiger's desire for being heard, an affinity to instruments and a reference to their religion, whereas the scale represents their search for truth, balance, justice and career of choice. United, they reference the armiger’s Hebrew birth month.