From Heraldry of the World
Your site history : Mine Hunter USS Cardinal (MHC-60)
Jump to navigation Jump to search 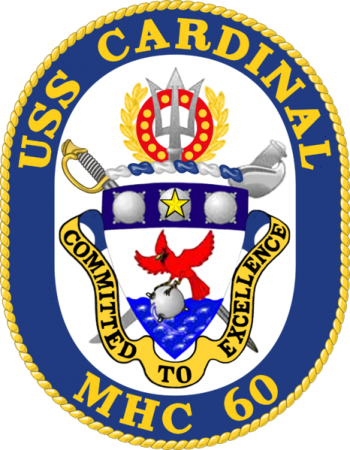 Shield: Or, a point wavy Azure seme of stylized whitecaps of the first overall a cardinal grasping in its claws a contact mine Proper on chief Azure (dark blue) three contact mines Proper the center mine charged with a mullet Or.
Crest: From a wreath Argent and Azure a laurel wreath Or enclosing an annulet Gules charged with twelve hexagons of the third, overall a demi-trident Argent.
Motto: A scroll Or doubled, edged and inscribed “COMMITTED TO EXCELLENCE” Azure (dark blue).

Dark blue represents the Navy. The ship’s namesake, the Cardinal, represents the mission by removing an enemy contact mine from the sea. The mines in chief recall the three previous Cardinals, the star on the center mine alluding to the battle star awarded YMS 179 for World War II service during which she swept a record number of mines. Red, white and blue refer to the colors of the National flag. Ultramarine blue refers to duties performed in coastal waterways. Red denotes courage, white signifies integrity. Crest: The annulet reflects the continuing tradition of distinguished service by all the ships which have borne the name Cardinal. Red symbolizes courage and sacrifice. The gold hexagons refer to the number of ships in the class and denote strength and endurance. The wreath indicates honor and achievement. The trident refers to the Navy, the three tines alluding again to the three previous Cardinals. Gold signifies excellence. Supporters: The Naval Officer’s sword and the cutlass represent past and present Naval service and readiness to defend the nation through command of the waterways of the United States.