From Heraldry of the World
Your site history : Moorfields Eye Hospital
Jump to navigation Jump to search 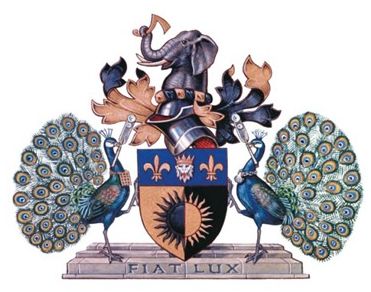 Arms : Per pale Or and sable, a sun counterchanged; on a chief azure a leopard's head argent, crowned with an eastern crown gold, between two fieurs-de-lis also gold.
Crest: On a wreath of the colours, An elephant's head couped· proper holding in the trunk a fleam Or.
Supporters: On either side a peacock in its pride holding in the beak an ophthalmoscope proper, the dexter gorged with a chain, pendent therefrom a portcullis Or, the sinister also gorged with a chain, pendant therefrom an escallop argent, the whole upon a compartment in the form of a stone plinth proper, thereon carved the Motto: Fiat lux.

Many allusions in the arms are obvious, e.g. the counterchanged sun representing darkness giving way to light; the fleam, the ancient form of a surgeon's lancet and the peacocks with their multiple 'eyes' with ophthalmoscopes in their beaks.

The leopards head and the fleur-de-lys come, respectively, from Guy's and St. Thomas's Hospitals and allude to the fact that members of the staff of these hospitals first suggested the founding of an eye hospital.

The elephant's head appears on many Saunder's arms and appears here as a reference to J. C. Saunders who founded the City Road branch of the hospital.

Other branches are referred to in the supporters. The portcullis has heraldic connections with Westminster since Tudor times and the escallop is a charge appearing on the arms of the Dukes of Bedford on whose territory the Central London Ophthalmic Hospital always occupied a site.

The compartment appears as a stone plinth in reference to the Institution's urban location and carved on it is the motto Fiat Lux - Let there be light.