From Heraldry of the World
Your site history : Mylo Hubert Claudio Vergara
Jump to navigation Jump to search 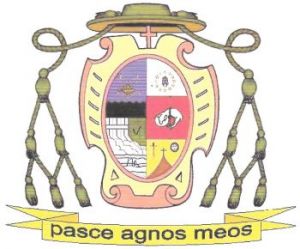 As common in episcopal heraldry, the arms show the arms of the diocese impaled with the personal arms of the bishop.

The upper part shows twelve stars symbolize the Holy Apostles, the patron saints of the Holy Apostles Senior Seminary where he received his priestly formation and training. They surround a blue Marian monogram symbolizing Mary, the Immaculate Conception, the Patroness of the Archdiocese of Manila where he began his pastoral ministry and of the new Diocese of Cubao where he served as Chancellor and subsequently as Episcopal Vicar for Clergy. Ordained during the Marian Year in the Philippines, the bishop entrusts his priestly life and ministry to the maternal care of the Blessed Virgin Mary.

The lamb depicts the core principle of his priesthood. The lamb hanging dead on the cross symbolizes Jesus Christ, priest and victim. The red background signifies the sacrificial offering of Jesus Christ as proof of His unconditional love for His people. The Bishop sees his priesthood as patterned after the sacrifice of Christ. Just like Jesus Christ , the "meek lamb led to be slaughtered," so shall he offer his life as sacrifice for the people he is called to minister. The symbol is actually taken from the old seal of his home parish in Fairview, Novaliches, Quezon City, the Good Shepherd Parish, to remind him to pattern his new ministry after that of Jesus, the Good Shepherd.

The three symbols in the lower part represent the saints who nurtured his faith and brought inspiration to his priestly life and ministry. The lance symbolizes the oblation of Ignatius of Loyola, the patron saint of Ateneo de Manila University where he received his academic training.
The mountain is reminiscent of Mount Carmel and signifies the three Carmelite doctors of the church, John of the Cross, Teresa of Avila and Therese of the Child Jesus, whose spiritual doctrine has motivated him to a life of prayer and contemplation.
The sun with a face symbolizes Thomas Aquinas, the patron saint of the Pontifical University of Santo Tomas where he completed his ecclesiastical doctoral studies. Thomas' theological insights not only allowed him to have a personal encounter with God but also brought him to a more enlightened faith in Him.
These three symbols signify the three gifts - discernment, prayer and faith - he wishes to bring with him to his ministry and pass on as gifts to his flock. The yellow color emanating from these symbols signifies the light that shines forth from the holiness of these saints and the light that the Bishop hopes to bring to his own people.

The Bishop has chosen for his motto Jesus' mandate to Simon Peter, "Feed my lambs" Pasce Agnos Meos (John 21:17).

The achievement is completed with the heraldic insignia of a prelate of the rank of bishop.