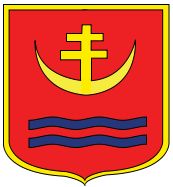 The crescent and cross refer to the mixed religious backgrounds of the people of Chad; Islam in the North and Christianity in the South. The cross chosen is the "Cross of Lorraine"; symbol of the "Free French", because Ndjamena (then Fort Lamy) was the base for General Leclerc's strike across the Sahara against the German General Rommel's forces, in the Second World War.

The colours are those of the national flag of Chad: Red, Yellow, Blue

The blue wavy lines refer to the River Chari, which forms the frontier between Chad and Cameroon at Ndjamena.