From Heraldry of the World
Your site history : Nanyang Technological University
Jump to navigation Jump to search 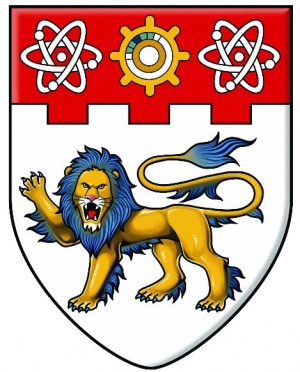 Argent a lion passant guardant proper on a chief embattled gules a cog-wheel between two conventional representations of an atom argent.

The lion, identical to the one which appears in the Coat of Arms of the National University of Singapore, signifies the close link between NTI and NUS.

The battlement symbolises the School of Civil and Structural Engineering while the atomic symbols refer to the School of Electrical and Electronic Engineering. The cog-wheel represents the School of Mechanical and Production Engineering and is also a traditional reference to engineering and technology in general. These three were the original Schools set up with the founding of the Nanyang Technological Institute, the predecessor institution of NTU.