From Heraldry of the World
Your site history : Natalie de Clare
Jump to navigation Jump to search 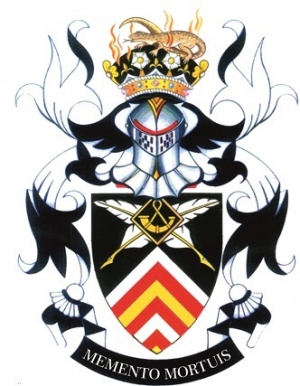 Arms: Per chevron Sable and in base chevronny of Argent, Gules, Or, Gules, Argent, Gules and Or, in chief two quillpens in saltire Argent, ribbed and nibbed Or, debruised of a lozenge Sable, edged Or, there-upon a bugle horn garnished and stringed Or.

Wreath and Mantling: Sable and Argent. (Wreath not displayed in emblazonment above)

Crest: Issuant from a crest coronet consisting of a headring Or, edged Argent, embellished of precious stones proper, heightened of four roses Argent, barbed and seeded Or, and two trefoils Or, each charged with a pearl proper, all alternated with six fleurs-de-lis Or, a mound Sable, there-upon a salamander in flames of fire proper.

The State Herald of South Africa used elements from the Lordship of Glamorgan's arms, the historical de Clare arms as well as those from the Counts of Perche. The Crest is a crest coronet of gold, silver and jewels. It is a hybrid coronet that uses the heraldic Danish Crown of Nobility as a base. The pearls from the Countess Coronet are replaced with fleur-de-lis to represent the armiger's ancestors from France, roses for her English ancestors, and trefoils for her Irish ancestors.