From Heraldry of the World
Your site history : National Arms of Bermuda
Jump to navigation Jump to search

National Coat of Arms of Bermuda

The arms show the British lion over the Sea Venture, the ship that discovered Bermuda in 1609.

Even though the arms were officially granted in 1910, they have been used already since the early 17th century, as shown below by an image of a book describing the islands from 1624. 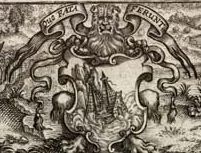