From Heraldry of the World
Your site history : National Arms of Dominica
Jump to navigation Jump to search 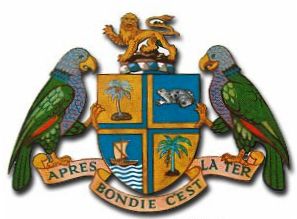 The arms were granted on July 21, 1961 and were retained after the independence.

The crest shows the British lion. The supporters are two parrots, which are also only to be found on the island. The motto is in the local French dialect and means 'After God, the land'.

The Crown Colony of Dominica used an oval landscape badge showing a ship tied up at a quay, with a setting or rising sun in the background. This badge appeared on both the colony's seal and on its flags - the Union Jack used by the Governor, the Blue Ensign used by Government vessels and the Red Ensign used by merchant vessels.

The island was discovered by Christopher Columbus, who discovered it on 3 November, a Sunday (Latin dies dominica, "the Lord's day).

The French colonised the island in the 17th century, but in 1748 an Anglo-French agreement assigned it to the Carib Indians. The island then changed hands several times, remaining a British colony after 1805.

Dominica belonged to the Federation of the West Indies from 1958 until its dissolution in 1962.

Under the West Indies Act of 1967, Dominica assumed free association with the United Kingdom. Full independence under a republican constitution was granted on 3 November 1978.