From Heraldry of the World
Your site history : National Arms of Guyana
Jump to navigation Jump to search 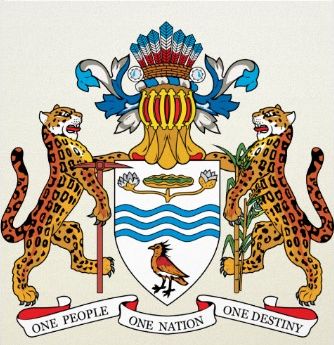 The Guyanese Coat of Arms was selected on the recommendation of the National History and Arts Council and approved by the College of Arms, England. The House of Assembly accepted it on Friday, 25th February, 1966.

The Native American head-dress symbolises the Amerindians as the indigenous people of the country. The two diamonds at the side of the head-dress represent the country's mining industry. The helmet is the monarchical insignia. The two jaguars holding a pickaxe, a sugar-cane and a stalk of rice symbolise labour and the two main agricultural industries of the country - sugar and rice. The shield, which is decorated with the national flower, the Victoria Regia Lily, is to protect the nation. The three blue wavy lines represent the many waters of Guyana. The Canje Pheasant at the bottom of the shield represents a rare bird found principally in this part of the world.