From Heraldry of the World
Your site history : National Arms of Ivory Coast
Jump to navigation Jump to search 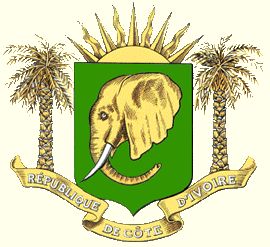 Ever since the independence in 1960 the country uses an elephant's head as national arms. The first arms showed a blue shield with a silver elephant. The shield surrounded by national flags, and on top of the shield a rising sun. Beside the shield two stylised trees. In 1964 the arms were removed and the trees replaced by palms. Also, the colour of the field changed from blue to green. In 1997 the colours were changed again (to a golden elephant), but the basic composition remained the same.