From Heraldry of the World
Your site history : National Arms of Latvia
Jump to navigation Jump to search 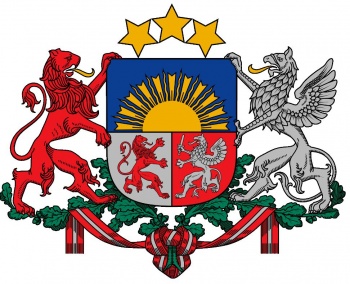 In the 1921 version the sun and stars remained, but the stars were placed above the shield.The two quarters in base each represent a part of the country: Courland and Semigallia (Kurzeme and Zemgale) making Western Latvia, are symbolised by a red lion. Livonia and Lettgallia (Vidzeme and Latgale) making Eastern Latvia, are symbolized by a griffin. These symbols are repeated by the supporters.

The garland of oak symbolizes power and endurance and refers to the holy oak-tree of the ancient lettonians.

The arms can also be used in simpler versions:

For the Latvian Soviet Republic of 1940-1991 a soviet-style national emblem was adopted: