From Heraldry of the World
Your site history : National Arms of Norway
Jump to navigation Jump to search

The National arms of NORWAY 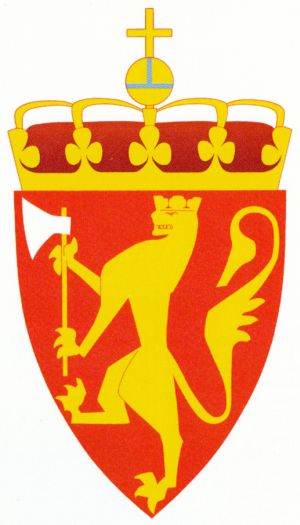 The arms of Norway have not changed basically since the 1280s. The oldest known symbol on a seal of a Norwegian King dates from the seal of King Sverre (1177-1202). On his seal he uses a shield with some kind of device on it, unfortunately it is not known what it showed exactly. His grandson Håkon Håkonsson the Old (1217-1263) used a shield with a lion. His son, Håkon the Young (1240-1257), however, used an eagle on his shield.

Duke Skule, father in law (and competitor for the throne) of Håkon the Old also used a lion on his seal. Since King Magnus Lawmender (1263-1280) the lion is the symbol used by the Norwegian Kings.

The colour of the arms is also already known since 1220, when it was written down in the King's Saga.

The different seals of the members of the royal family in the 13th century have been studied in detail, but it did not result in much new knowledge on the symbols itself.

In 1280 the new king, King Eirik Magnusson, added the crown to the lion and he also added the axe in the forepaws. The attributes were added as a symbol for the H.King Olav (1015-1030), founder of the Norwegian State. He used a crown and axe as his symbols.

He also added 23 roses to the shield, but these were already removed in 1285. The meaning of the roses is still unclear. Ever since the arms have been used as the arms for Norway, whether as an independent Kingdom, or as part of the Danish Kingdom.

The shape of the lion, the size of the axe and the shield have varied widely through the centuries, but the basic composition remained the same. In the 20th century the arms have been described officially several times, but any painter or artist is allowed to add his own style. In the Roll of Arms of the herald of Gelre in 1370 the arms are shown quartered with four times the lion.

Above the arms, the kings mainly used a helmet, but sometimes an additional crest was used. A star encompassing a half-lion was used by King Eirik Magnusson on his second seal (1285-1289). It was used very rarely until 1660, when the crest was used again on official documents. This was again abandoned in 1699.

In 1844 King Oscar II officially adopted the arms below as the National arms. Until then the National arms and the Royal arms were identical. The latter always showed the lion in a separate field as the true arms of Norway, but there were no official National arms. This practice continued for the royal arms, see the arms of Oscar II as King of Sweden and Norway, also from 1844. In these arms the lion of Norway was combined with the arms of Sweden and the arms of the dynasty as escutcheon.
From 1905-1937 another crest, showing the Norwegian lion with the axe, was used as a crest behind the crown.