From Heraldry of the World
Your site history : National Arms of Zimbabwe
Jump to navigation Jump to search

THE NATIONAL ARMS OF ZIMBABWE 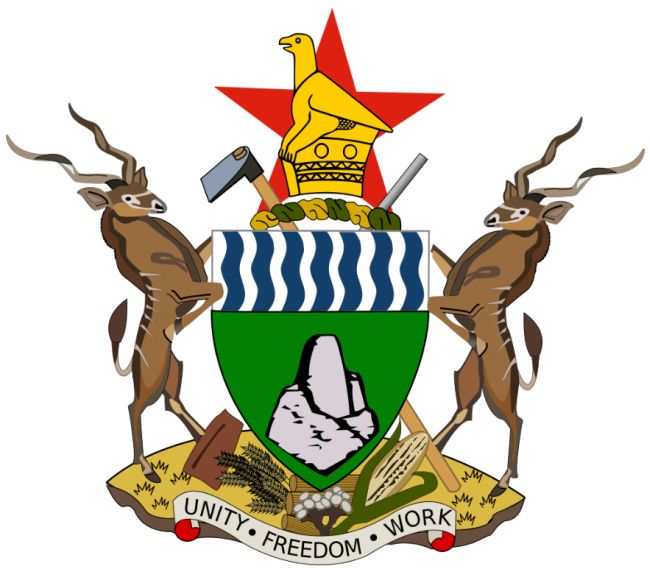 Arms : Vert, a representation of Great Zimbabwe Argent; A chief argent seven pallets wavy Azure with an agricultural hoe and an automatic rifle crossed behind the shield.
Crest: A Zimbabwe Bird a red mullet Gules background.
Supporters : Two Kudus prope.
Compartment : An earthly mound composed of stalks of wheat, a pile of cotton, and a head of maize.
Motto: Unity, Freedom, Work

The arms were officially granted on September 21, 1981.

The green shield represents the fertility of the soil while the blue and white wavy lines symbolise the water which brings prosperity. The representation of Great Zimbabwe stands for the historical heritage of the nation. The rifle and hoe represent the transition from war to peace. The wreath is formed of twisted strips of gold and green silk, and represents the mining and agricultural enterprises. This supports the crest in which the star is an ancient symbol of hope for the future, tinctured red as a reminder of the sufferingof the people of Zimbabwe.

The star bears the Great Zimbabwe bird, the national emblem.

The kudu in their natural colours display a harmonious blend of black, white and brown which may be taken to symbolise the unity of purpose of the various ethnic groups which comprise the people of the country.

The earthen mound bears the plants which give food and clothing to the people and the motto is a reminder of the need to maintain a desire for national unity and the will to work, in order to preserve the freedom which we enjoy.

The present territory of Zimbabwe was initially ruled by the British South Africa Company. In 1923 it was named Southern Rhodesia, which in 1954 was joined with Nyasaland (now Malawi) to form the Federation of Rhodesia and Nyasaland. In 1963, after the independence of Malawi, it became Rhodesia until full independence as Zimbabwe in 1981. 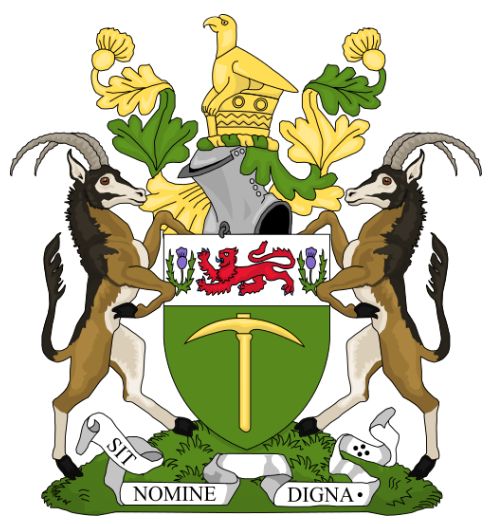 The Rhodesian arms were granted by Royal Warrant on 11 August 1924, when the country was still Southern Rhodesia.

The lion and thistles were taken from Cecil Rhodes's personal arms. The pick represents mining and agriculture.
The motto "Sit Nomine Digna" means "May she be worthy of the name".