From Heraldry of the World
Your site history : National and Grindlays Bank Limited
Jump to navigation Jump to search 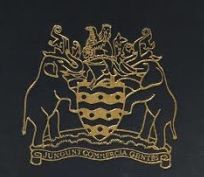 Arms: Barry wavy of eight azure bezantee and argent.
Crest: On a wreath of the colours, A demi lion gules supporting a cornucopia inverted proper.
Supporters: On the dexter side an Indian elephant and on the sinister side an African elephant, both proper.
Motto: Surgunt commercia gentes.

The arms were officially granted on August 4, 1954 to the National Bank of India Limited.

If you have any information on these arms and Grindlays Bank Limited mail us !