The National Arms of Ireland

From Heraldry of the World
(Redirected from National arms of Ireland)

Your site history : The National Arms of Ireland
Jump to navigation Jump to search 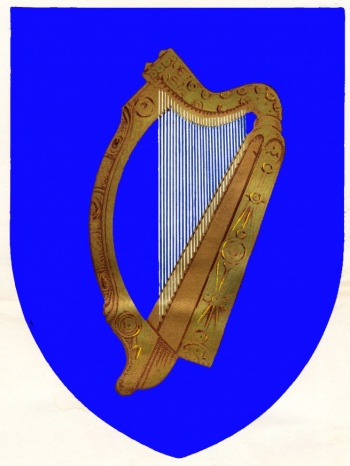 The arms are not officially recorded, but have been used for centuries as the arms of Ireland.

The traditional and well-known arms of Ireland are Azure a harp or (gold harp on blue field). They have been used by English monarchs to represent their claim to the island since the time of Henry VIII (r. 1509-1547), who first used a harp on his Irish coinage. Elizabeth I used a crowned harp as a badge for Ireland in her second Great Seal of 1586, although her Irish coinage showed three harps. Finally, when, in 1603, a new coat of arms was designed on the occasion of the union of England and Scotland under James I, a quarter with gold harp on blue representing Ireland was added. The quarter is still in the modern arms of the United Kingdom of Great Britain and Northern Ireland.

The gold harp on blue is attributed to the King of Ireland in one of the oldest medieval rolls of arms, the Wijnbergen Roll (a Flemish roll of arms dating from c. 1280). The harp, traditionally associated with King David, was a rare charge in early medieval rolls. Léon Jéquier's ordinary of 19 early rolls (in Cahiers d'Héraldique) has only two arms with a harp, the Irish coat of arms in the Wijnbergen roll, and the Steinach family in the Zurich roll of arms c.1340.

The harp is in fact the O'neill's harp dating from the tenth century at least, but is generally known as the Brian Bó Rúadh harp, for a famous Irish king, who died in 1014. It is located in the Trinity college library in Dublin.

On 15th February, 1946, the Chief Herald of Ireland, Edward MacLysaght, suggested the following as the full armorial achievement for Ireland:

The motto "Do chum glóire Dé agus Onóra na hÉireann" is a phrase that appears at the end of the 1937 Constitution of Ireland and means ‘Composed for the glory of God and the honour of Ireland’ in Irish.

The Irish harp is widely used on all kinds of items, including the national sports teams etc.

before the Norman Conquest, Ireland was divided into four historical provinces, were kingdoms in their own right. The High King of Ireland was always the ruler of one of these four kingdoms.

These four provinces are:

I have no information on the meaning of the arms of Connaught, Leinster and Munster. Any information is welcome !

The story on the 'Red Hand' of Ulster tells that some invaders were approaching the coast in a boat. Their leader promised the land that they could see to the first man to touch it. Thereupon a chap in the boat cut off his hand and threw it ashore and thus became the owner of the area. In another mail I received a slightly different version :
The Red hand of Ulster comes from a legend that two Viking lords were racing to Ulster, and the lord who could first put his hand on Ulster soil, would claim the land. As they came close to shore, one of the lords realised he would loose to the other. He then cut of his hand and threw it ashore to claim the land for him and his people.

These four arms are also still seen combined as historical arms of Ireland: