Your site history : National Arms of the Central African Republic
Jump to navigation Jump to search 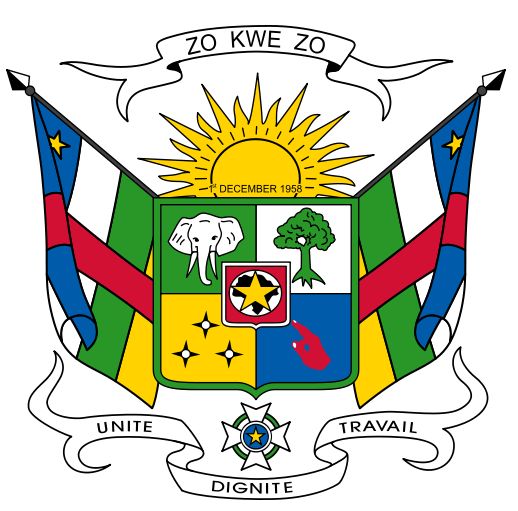 The arms show in a quartered shield an elephant, a tree, a star and a black hand. The escutcheon shows a circle with the map of Africa and a star. The elephant and the baobab tree represent nature and the backbone of the country. The gold star on a map of Africa symbolizes the position of the Central African Republic. The hand (bottom right quarter) was the symbol of the dominant MESAN party in 1963 when the arms were adopted. The bottom left quarter holds three diamonds, which symbolize the mineral resources of the country.

The shield is surrounded by two national flags, a sun an the Order of Merit of the country. The upper motto in Sango 'Zo kwe zo' means 'All People are people', the lower motto in French 'Unité, Dignité, Travail', means 'Unity, dignity, labour'.

The medal under the shield is the decoration of the Order of Central African Merit.

After the independence in 1958 the new state adopted as arms a shield with the national flag. These arms remained in use until 1963.