From Heraldry of the World
Your site history : Neil Thompson
Jump to navigation Jump to search 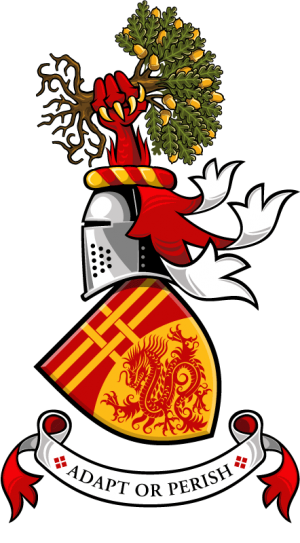 Arms: Per fess arched and enhanced Gules and Or in chief a cross double parted and fretted of the second and in base a Chinese dragon globular of the first.
Crest: A dragon’s foot Gules armed Or grasping an oak tree eradicated Proper acorned Or.

The parallel lines at the top of the shield represent railway tracks and are an acknowledgement of the armiger’s 25-year career in the railway industry, as well as many British and Irish ancestors who worked on the railways, one of whom tragically lost his life in an accident at Westland Row Station in Dublin in 1926.

The red Chinese dragon represents the armiger’s strong connection with the island of Taiwan. The armiger worked as a Consultant on the Taiwan High-Speed Railway project, both before and after the railway’s entry into service in 2007. The armiger was born in the year of the Wood Dragon in the Chinese zodiac. His official name in Chinese, adopted when his daughter was born in Taiwan, includes ‘Lucky Dragon’ (劉瑞龍). The red Chinese dragon on the shield, with its circular shape, is a charge previously unknown in Irish heraldry, which required the Herald of Arms to use innovative blazonry, using globular to describe the dragon’s posture.