From Heraldry of the World
Your site history : New College (Oxford University)
Jump to navigation Jump to search 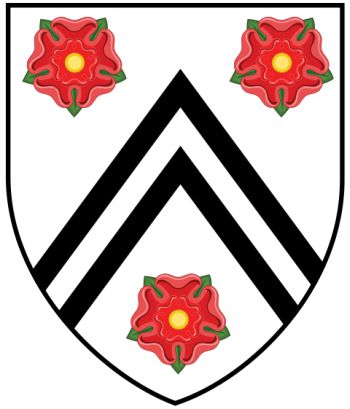 William of Wykeham, Bishop of Winchester, Chancellor of England, and one of the richest men of his day obtained a Papal Bull for the endowment of Winchester College in 1378. In the following year he issued a charter for the foundation of " Seinte Marie College of Wynchestre in Oxen-forde," now known as New College. His College at Oxford was completed in 1386, and that at Winchester in 1394. Both foundations use the well known motto " Manners Makyth Man " and William's personal arms, ' argent, two chevronels sable between three roses gules, barbed and seeded proper.' The idea that the chevronels refer to the Bishop's two foundations is attractive but incorrect. William used these arms before either college had been founded.