From Heraldry of the World
Your site history : New South Wales Bar Association
Jump to navigation Jump to search 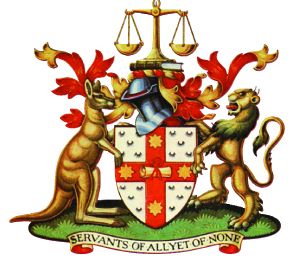 Arms : Ermine, on a Cross Gules a Brief Scroll fessewise proper, Taped Gules, between four Stars each of eight points Or.
Crest : On a Wreath Or and Gules, a closed Book proper, standing thereon a pair of Scales Or.
Supporters : On the dexter side a Kangaroo, and on the sinister a Lion, both proper.
Motto: 'Servants of All yet of None'.

The arms were officially granted on December 30, 1969.

The red cross, four gold stars each of eight points, and the Supporters (transposed, but also reflecting a link with Great Britain, as the home of the Bar) are taken from the Arms of the State of New South Wales, as the home State of the Association. The field of the Shield is ermine to denote the close relationship of Bench and Bar, and the fact that appointments to the Bench come mainly from the Bar. The brief scroll represents a barrister's brief.

In the Crest the book and scales again refer to the profession of the Law and its responsibility in the administration of justice.