From Heraldry of the World
Your site history : Newbury
Jump to navigation Jump to search 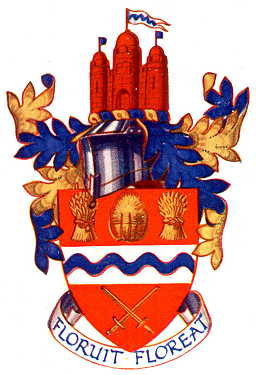 Arms : Gules on a Fesse Argent between in chief a Teazle Flower between two Garbs and in base as many Swords in saltire points upwards Or a Bar wavy Azure.
Crest : On a Wreath Or and Azure a Castle of three Towers domed Gules flying from the centre tower a forked Pennant Argent charged with a Bar wavy Azure and from the exterior towers a Flag also Azure.
Motto: 'FLORUIT FLOREAT' - May it flourish as it has flourished.

Across the centre of the shield is a representation of the River Kennet. Above this is a teasle flower. These were once used to unpick wool and represents the historic woollen industry. The garbs are for agriculture. The crossed swords in base stand for the two Battles of Newbury.

The crest depicts Newbury Castle. The mantling is in the blue and goldcolours of Berkshire county Council.The arms are continued by the Newbury Town Council.