From Heraldry of the World
Your site history : Nideggen
Jump to navigation Jump to search 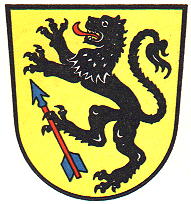 Nideggen received city rights in 1313 from Count Gerhard I of Jülich. The oldest seal shows the arms of the Counts of Jülich hanging on a hook. The present combination of the lion of Jülich and the arrow dates from the 16th century.