From Heraldry of the World
Your site history : No 133 (Eagle) Squadron, Royal Air Force
Jump to navigation Jump to search

History: Raised at Ternhill in March 1918. 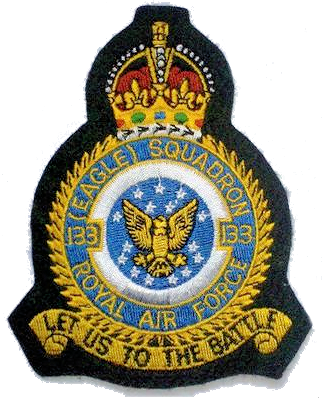 Badge: On a hurt semee of mullets argent an eagle displayed Or.
Motto: Let us to the battle.

The Squadron was manned by American Volunteers when petitioning for a Badge, they are symbolised by the Eagle. The Hurt and Stars symbolise their role in the Air. The Badge was granted in Septmber 1942.