From Heraldry of the World
Your site history : Norfolk and Norwich University Hospital
Jump to navigation Jump to search 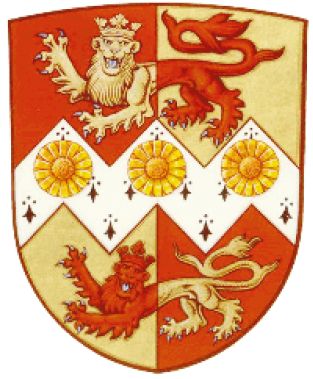 The ‘Dance’ in the arms is derived from those of the original hospital’s founder, William Fellowes, who bore: Azure a Fess dancetty Ermine between three Lions’ Heads erased Or, murally crowned Azure.

The Lions were chosen to reflect the lions in the arms of the City of Norwich and of the County of Norfolk.

The Pot Marigold flowers were suggested by the then Richmond Herald, Mr J P Brooke-Little in response to a request for a floral symbol of healing to be placed on the fess. It was chosen as it was used medicinally by herbalists and as it resembles the sun which is itself a symbol of health and healing.

Literature : Info send to me by mail.