From Heraldry of the World
Your site history : North Eastern Railways
Jump to navigation Jump to search 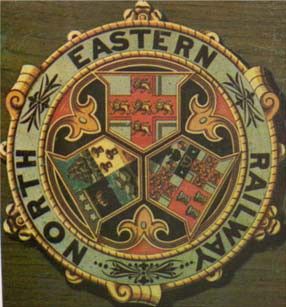 The company was an amalgamation of the York & North Midland, the Leeds Northern and the York, Newcastle & Berwick Railways (1854). The device shows the arms of York and two shields with a combination of the arms of several towns and elements of trade.