From Heraldry of the World
Your site history : North Vancouver (District)
Jump to navigation Jump to search 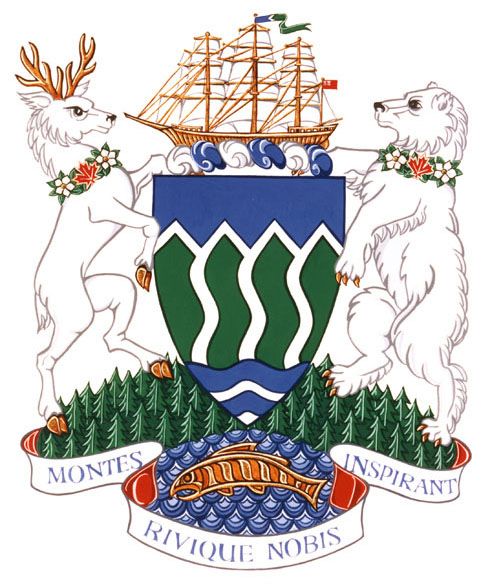 Arms : Vert three pallets wavy Argent jessant from a chief dancetty Azure fimbriated Argent in base barry wavy of four Azure and Argent.
Crest: A representation of a triple masted sailing vessel Or sails Argent flying from the centre mast a pennant parted Azure and Vert by a chevron couched sinister Argent.
Supporters: On a compartment of forested slopes rising above the sea proper charged with a representation of a Salish salmon Or dexter a deer Argent attired and unguled Or gorged with a collar of salal leaves Vert charged with a maple leaf Gules fimbriated Argent between two dogwood flowers Argent seeded Or sinister a bear Argent armed Or gorged with a like collar.
Motto: MONTES RIVIQUE NOBIS INSPIRANT

The arms were officially granted on October 16 and again on December 18, 1990.

The arms portrait some of the most important features of the District's geography and history.

At the heart of the symbol is a shield featuring a stylization of the District's landscape; the snow-capped mountains rising above the waters of the harbour with wavy silver lines representing rivers, creek and streams. Above the shield is a crest honouring sea-going commerce, an important element in both the early history of the District and its continuing prosperity.

The late 19th century sailing ship flies two flags: the merchant ensign in use at the time of incorporation in 1891 and a special pennant in the District colours of silver, blue and green.

The bear and deer, of heraldic silver, with their collars of maple leaves and dogwood flowers, speak of the riches of the natural environment we have been entrusted to preserve and cherish.

The supporters stand on a compartment of forested slopes reminding us of the wealth and beauty the trees have always provided. At the base of the forest is the sea. A representation of a Salish style salmon honours our first people.

The motto is a summation of the design and the essence of our heritage: "The Mountains and Their Streams are our Inspiration."