From Heraldry of the World
Your site history : North Wales Police
Jump to navigation Jump to search 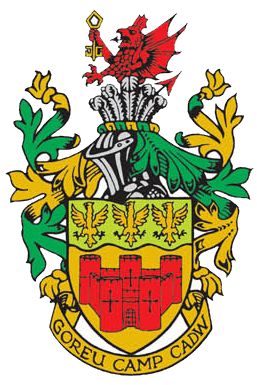 Arms : Argent, an Edwardian Castle of five towers, three and two, in perspective gules; on a chief wavy vert three eagles displayed Or.
Crest: On a wreath argent and vert, Issuant from a plume of five ostrich feathers argent a demi dragon gules holding in the dexter claw a key with pentagonal bow and double bit in the form of two letters G addorsed downwards Or.
Motto: Goreu camp cadw.

The arms were officially granted on November 10, 1967 to the Gwynned Police Authority.

If you have any information on these arms Wales Police mail us !