From Heraldry of the World
Your site history : Offaly (county)
Jump to navigation Jump to search 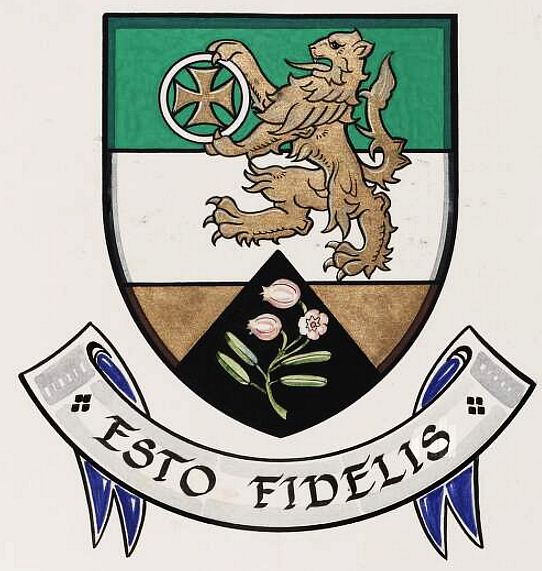 Tierced in fess vert, argent and or, a lion rampant holding between the paws a cross pattée concave all of the last, the cross within an annulet of the second, on a point pointed in base sable a sprig of Andromeda polifolia proper, with the Motto: Esto fidelis.

The principal tincture or colours used - green, white and gold - are of course, the sporting colours of the County. The gold lion symbolises the Ui Failbhe, the Laiginian people after whom the County is named. This traditional symbol of the Ui Failbhe has been maintained in the coat of arms of the O'Connor family of Offaly. The cross upheld by the lion is reproduced from the Book of Durrow now in the Library of Trinity College, Dublin. The point in base sable is intended to represent the bogland of the county with a sprig of Andromeda polifolia as an appropriate county flower.

The motto Esto Fidelis is suggested by the aliter dictum for county Offaly - the Faithful County. It would be rendered: Be You Faithful (to the County and its traditions).