From Heraldry of the World
Your site history : Orient Steam Navigation Company
Jump to navigation Jump to search

Acquired by Peninsular and Oriental Steam Navigation Company in 1960 (now part of P&O). 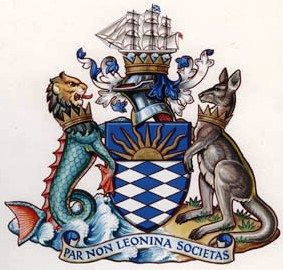 Arms : Fusilly fesswise Argent and Azure, on a Chief of the last a rising Sun in splendour Or.
Crest: Out of an Eastern Crown Or, on Waves of the Sea, a representation of the Clipper Ship ORIENT proper.
Supporters : On the dexter side a Sea Lion, and on the sinister side a Kangaroo, both proper and gorged with an Eastern Crown Or.
Motto: 'Par Non Leonina Societas'.

If you have any information on these arms Steam Navigation Company mail us !