From Heraldry of the World
Your site history : Pétange
Jump to navigation Jump to search 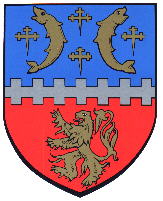 The bar also represents the railway and the industrial character of the municipality.