From Heraldry of the World
Your site history : Pakenham
Jump to navigation Jump to search 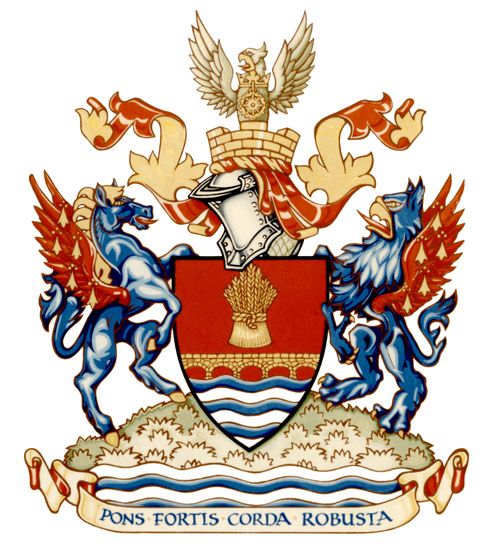 Arms : Gules issuant from a base barry wavy of six Azure and Argent a representation of a five span stone bridge Or masoned Sable in chief a garb Or.
Crest: A mural coronet Or masoned Sable issuant therefrom an eagle wings displayed Vert beaked and gorged with a coronet erablé pendant therefrom a mill water wheel Or.
Supporters: Upon a grassy mound rising above barry wavy Argent and Azure dexter a pegasus Azure unguled and crined Or winged Gules semé of ermine spots Or sinister a griffin Azure armed and beaked Or winged Gules semé of ermine spots Or.
Motto: PONS FORTIS CORDA ROBUSTA

The town was named after Lieutenant-General Sir Edward Michael Pakenham.. After distinguished service in the Peninsular War against Napoleon, he commanded the British forces defeated by Andrew Jackson at the Battle of New Orleans (1815), where he was killed in action.

The river in the arms is the Mississippi river, which was important as a source of power for the local timber and woollen mills, after the area was settled in the 1820s. The bridge is the only example of a five-pier stone bridge in North America and thus an appropriate symbol for the town. The agricultural character of the area is symbolised by the wheatsheaf.

The crest and the griffin supporter are derived from the arms of the Pakenham family. The origin of the other supporter I don't know.