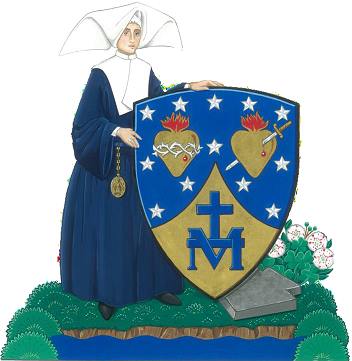 The shield of the arms incorporates four images found on the Miraculous Medal which had been first entrusted to Saint Catherine Labouré by the Blessed Virgin Mary, the Marian monogram, the stars from Sacred Scripture (as ascribed to Mary in the Apocalypse: 12-13), and the Sacred Heart of Jesus and the Immaculate Heart of Mary side by side.

The gold represents the Divinity of the Trinity, the blue i sthe colour of Saint Mary.

The letter M stnads for St. Mary and is surmounted by a Christian Cross, an image presented to St. Catherine by the Virgin Mary Herself.

The two hearts represent the Sacred Heart of Jesus and the Immaculate Heart of Mary, linked theologically as Mary always stood beside her Son. These two images associated with the Miraculous Medal are surrounded by the twelve stars that surround Mary’s head as a halo in many Marian images, most definitely those associated with Her as Our Lady of the Miraculous Medal as seen on the obverse of the medal itself. Both hearts suffer and bleed for the world.

The supporter is Saint Catherine Labouré.