From Heraldry of the World
Your site history : Paul Benjamin Lindsay
Jump to navigation Jump to search 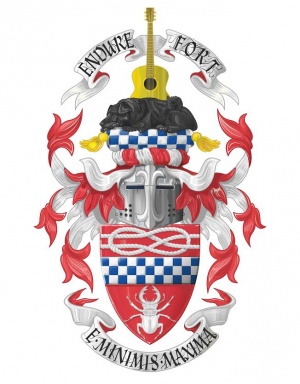 Arms: Gules a fess enhanced chequey Azure and Argent between in chief a sheet bend knot fesswise throughout Argent and in base a male stag beetle palewise Argent

Crest: Upon a cushion chequery Azure and Argent tassled Or an acoustic guitar palewise Or behind a Talbot dog dormant in natural pose Sable.

The arms are derived from the traditional Clan Lindsay arms of Gules a fess chequery Argent and Azure differenced in three ways indicating the armiger’s belief in the importance of family, heritage and ancestry. The sheet bend knot is the International symbol for Vexillology (flags) and its International body. The armiger has been a scholar for over thirty years and the stag beetle recognises the armiger’s profession and field of academic study being a Bachelor of Agricultural Science majoring in entomology (the study of insects). The chequey cushion denotes ancestry and family and links to the fess in the shield.

Azure and Argent are the livery colours of the armiger’s mother. The Golden Guitar illustrates the armiger’s favourite hobby and is the symbol of Country Music in Australia being the highest accolade at the annual awards ceremony; a ten metre statue of the Golden Guitar appears outside Tamworth, Australia’s Nashville. Lastly the sleeping black dog alludes to the armiger’s triumph over depression; the black dog is widely used throughout the world as a symbol of this illness due to Churchill’s many references to it.

Endure Fort is the war-cry for Clan Lindsay and translates to Endure with Strength. E Minimis Maxima has many translations but the armiger prefers to paraphrase it as “from little things big things grow”.