From Heraldry of the World
Your site history : Pearl Assurance Company
Jump to navigation Jump to search 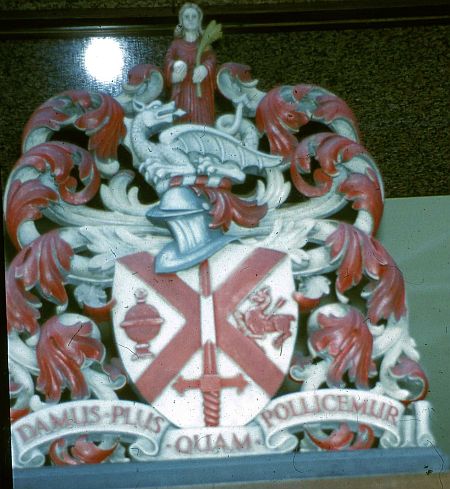 Arms: Argent, a saltire gules surmounted by a sword erect counterchanged between a covered cup and a hind lodged pierced with an arrow in fesse of the second.
Crest: On a wreath of the colours, A figure representing St. Margaret, vested gules, in the dexter hand a pearl, and in the sinister a palm branch, both proper, at her feet a dragon couchant reguardant argent.
Motto: Damus plus quam pollicemur

The arms were officially granted on November 30, 1911.

The saltire is taken from the Arms of the Borough of Holborn in which the Head Office of the Company is situated. In the Holborn Arms it refers to the Churches of St. George the Martyr, and St. George, Bloomsbury, both in the Borough. The sword is taken from the London City Arms, the Sword of St. Paul, signifying the nature of his death. The wounded hind is also from the Borough Arms referring to St. Giles-in-the-Fields, an allusion to the legend that St. Giles (St. Aegidus) received the injury which crippled him while saving a hind from the huntsman.

The covered cup refers to the Borough of Stepney, whose patron Saint is St. Dunstan. It was in Stepney that the Company had its first place of business at Denmark House, Commercial Street. St. Dunstan was a famous Saint in the Middle Ages, Abbot of Glastonbury Abbey and later Archbishop of Canterbury. He was an expert worker in metal and invented the famous peg tankard, a device that a man might know how much he had drunk and so be warned against excess.

The Crest refers to the legend of Saint Margaret of Antioch, the Christian daughter of a pagan priest, who was imprisoned for her faith, and was devoured by Satan, in the form of a Dragon. With the Cross that she wore she possessed the power to burst the Dragon open, and Margaret emerged unhurt. Margaret (Margarita) is a " Pearl", and is thus a canting or pun on the name of the Company linked with a legend of great antiquity. The Palm Branch in her left hand is an emblem of honour, from the use from earliest times of palm leaves as a symbol of success. Its use dates back to Roman times when the successful competitor " took the Palm", the highest honour attainable.

The Silver dragon is associated with the legend of St. Margaret.

The motto means "We give more than we promise".