From Heraldry of the World
Your site history : Pembroke College (Oxford University)
Jump to navigation Jump to search 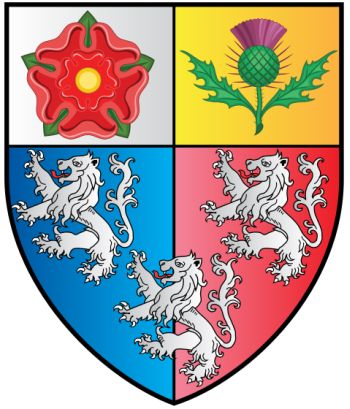 Per pale azure and gules, three lions rampant, two and one, argent; a chief per pale Or and argent, thereon on the dexter a rose of the second, barbed and seeded proper, and on the sinister a thistle also proper.

The arms were officially granted in 1625.

Pembroke College was founded by James I. in 1624 'at the costs and charges of Thomas Tesdale and Richard Wightwick.' The lower part of the shield shows the arms of Herbert, Earls of Pembroke. ' per pale azure and gules, three lions rampant argent,' for at the time of foundation William Herbert, 3rd Earl of Pembroke was Chancellor of Oxford. The chief 'per pale argent and or, in the dexter a rose gules, barbed and seeded proper, and in the sinister a thistle of Scotland proper.' refer to James I.