From Heraldry of the World
Your site history : Pharmaceutical Society of Great Britain
Jump to navigation Jump to search 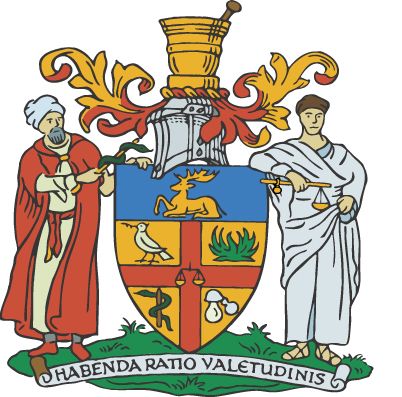 Arms : Or, on a cross gules between a dove holding in the mouth an olive branch in the first quarter, an aloe in the second, a staff erect entwined by a serpent in the third, and an alembic and receiver in the fourth, all proper, a pair of scales of the first; on a chief azure a stag lodged also of the first.
Crest: On a wreath of the colours, A mortar, therein a pestle Or.
Supporters: On the dexter side a figure intended to represent Avicenna, habited in a dark red robe with a white under vest, his shoes red, around his waist a shawl also red fringed gold, and upon his head a white turban, in his right hand a staff gold entwined with a serpent proper; and on the sinister side a figure intended to represent Galen, habited in a long white vest and loose robe, his sandals red, and holding in his right hand a steelyard Or.
Motto: Habenda ratio valetudinis.

If you have any information on these arms Society of Great Britain mail us !