Philippe A. A. Pille

From Heraldry of the World
Your site history : Philippe A. A. Pille
Jump to navigation Jump to search

Cdr (Ret) PHILIPPE A. A. PILLE 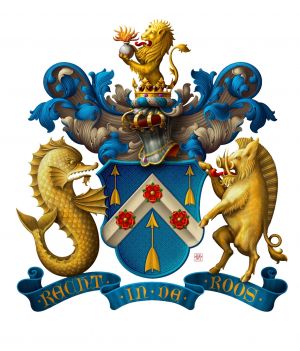 Arms: Azure, on a chevron Argent between three arrows Or, three roses Gules seeded Or and barbed Vert.

Crest: A demi-lion rampant Or armed and langued Gules, holding in the forepaws a grenade Argent flamed Gules issuant from a torse Argent and Azure

The armiger bears canting arms: his name “Pille” is a Flemish dialect word, meaning “arrow”. The three arrows represent the armiger’s three most important life values: honesty, diligence and eagerness to learn. The chevron with the three roses symbolise the armiger’s aim in life : to live in service of God, country and family. The two main tinctures : Azure and Argent are those of the arms of the town of Wevelgem, the cradle of the Pille Family.

The crest reflects the armiger’s military career during which he was a senior officer in the Belgian Explosive Ordnance Disposal (EOD) Group. The lion in the crest refers to the Coat of Arms of the Kingdom of Belgium and to the Brussels Royal Military Academy, while the grenade stands for the bomb disposal missions and operations in which he participated.

The supporters refer to the two Belgian EOD battalions, operating during and after WWII. The dolphin (dexter) was the unit insignia of the Coast EOD Battalion, whereas the boar (sinister) was the insignia of the EOD batallion, operating in the Ardennes. By extension, the dolphin represents the North of the country (Flanders), the boar the South (the Walloon region) and the lion in the crest symbolizes the bonding factor between these two regions of Belgium.