From Heraldry of the World
Your site history : Phillip Guin
Jump to navigation Jump to search 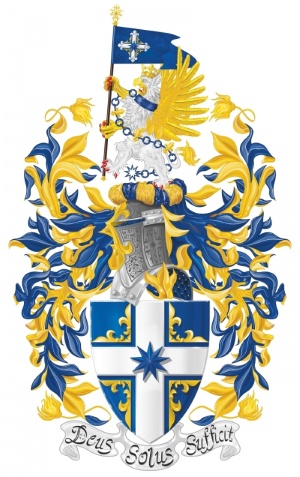 Shield: Azure on a cross Argent cotised by eight demi fleurs-de-lys Or a mullet of nine points Azure

Crest: On a torse Or and Azure a griffin segreant Argent winged, beaked, membered, tufted and crowned with an ancient crown of three fleurs-de-lys Or gorged and chained, the chain terminating in a nine-point mullet voided and alternating with links Azure and three fleurs-de-lys Or, supporting a staff flying a pennon Azure charged with a cross fleury Argent cotised by eight demi fleur-de-lys Or overall a mullet of nine points Argent.

The design of the shield and crest were intended to reflect the armigers devotion to his faith and his family. The cross argent represents strong Christian faith. The fleurs-de-lys, a symbol associated with the armigers native Louisiana, represents family. The nine pointed mullet symbolizes the "Fruit of the Spirit" found in Galatians 5:22-23: Love, Joy, Peace, Patience, Kindness, Goodness, Faithfulness, Gentleness and Self-Control. The mullet or star as a source of light, also serves as a reminder that by incorporating the aforementioned attributes into daily life we may reflect the light of Christ into the world around us.

The Griffin in the crest alludes to the dual nature of the Christian life. As the griffin is a creature of land and sky, so to is the Christian a creature of earth and Heaven. Gorged and chained, the griffin is kept grounded by loyalty and service to faith and family. The golden crown of three fleurs-de-lys again alludes to the armigers family (wife and children specifically) which he considers to be his crowning glory. The symbolism on the pennon and the badge reflect that of the shield.

The motto Deus Solus Sufficit (God Alone Suffices) is taken from a poem by Teresa of Avila:

Let nothing disturb you,
Let nothing frighten you,
All things are passing away:
God never changes.
Patience obtains all things
Whoever has God lacks nothing;
GOD ALONE SUFFICES

Arms were assumed in February of 2017. Emblazoned by Ljubodrag Grujic.