From Heraldry of the World
Your site history : Pickering Kenyon (Solicitors)
Jump to navigation Jump to search 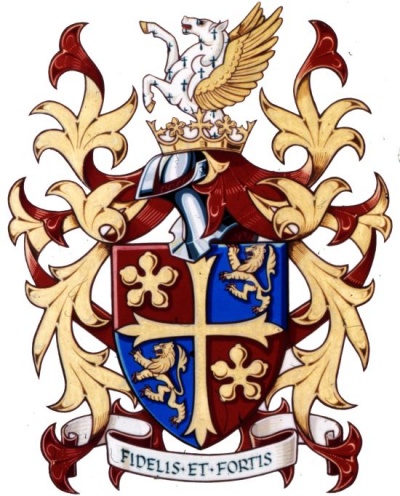 Arms: Quarterly Gules and Azure overall a cross patonce between in the first and fourth quarters a cinquefoil and in the second and third quarters a lion rampant Gold.
Crest: Out of a coronet the finials composed of crosses patonce and cinquefoils a demi Pegasus Ermine winged and unguled Gold.
Mantling: Gules doubled Or.
Motto: "Fidelis et Fortis"

The Crest consists of a coronet of alternating crosses patonce and cinquefoils, continuing the Umfreville connection. Arising out of the coronet is a demi-pegasus. Besides signifying swiftness of service (as the lions signify strength) the pegasus also appears in the Arms of the Inner Temple and thus again commemorates the Umfreville connection with the Temple. The legal flavour of the Arms is reinforced by the fact that the Law Society's Arms have as supporters a lion and a pegasus.

The motto 'Fidelis et Fortis' is best translated as Faithful and Strong'.

Literature : image and info from https://www.theheraldrysociety.com/