From Heraldry of the World
Your site history : Plettenberg Bay Primary School
Jump to navigation Jump to search 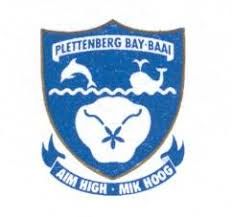 The shell, also known as a sand dollar, is that of a kind of sea urchin, and shells of this kind frequently wash up on the shores of Plettenberg Bay, although whole shells are sought-after items.

In the past, Plettenberg Bay was known for whaling, and its best-known hotel, the Beacon Island – the second hotel built on the site – stands where a 19th-century whaling station stood. The island (no longer an island, but joined to the land by an embankment) is at the mouth of the Piesang River. Since the moratorium on whaling, whales have become a common sight in the bay, as at many other sheltered bays along South Africa’s southern coastline, as Antarctic whale species travel north to give birth in this region.

Dolphins are also commonly seen in the waves.