From Heraldry of the World
Your site history : Plymouth
Jump to navigation Jump to search 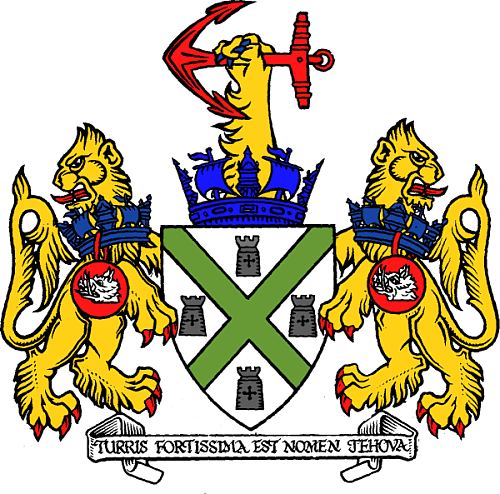 Arms : Argent a Saltire Vert between four Towers Sable.
Crest : Issuant from a Naval Crown Azure a Lion's Gamb erect Or grasping an Anchor fessewise Gules.
Supporters : On either side a Lion reguardant Or gorged with a Naval Crown Azure pendent therefrom by a Riband Gules a Torteau charged with a Boar's Head couped Argent.
Motto: 'TURRIS FORTISSIMA EST NOMEN JEHOVA' - The name of the Lord is our strongest tower.

The arms were officially recorded in 1620. Following the addition of the two neighbouring towns of East Stonehouse and Devonport in 1914, and the elevation to a City in 1928, a crest and supporters were added to the historic arms in 1931.

The arms show a saltire for St. Andrew, patron saint of Plymouth, between four towers for the town's fortifications. This shield was sometimes shown suported by two gold lions, but they were never officially granted.

The crest is for Devonport. It consists of a Naval Crown, from which rises an English lion's paw grasping an anchor. Devonport contained the most important Royal Naval Dockyard of the then British Empire.

The supporters recall the gold lions unofficially used in previous years. They are differenced by being made regarduant and having naval crowns around their necks. From the crowns hang roundels with a boar's head for the Mount Edgcumbe family, who were closely associated with the town of East Stonehouse.

The motto is TURRIS FORTISSIMA EST NOMEN JEHOVAH or The Name of the Lord is the Strongest Tower. Aside from the biblical reference the motto echoes the towers in the arms.