From Heraldry of the World
Your site history : Police Federation for Northern Ireland
Jump to navigation Jump to search 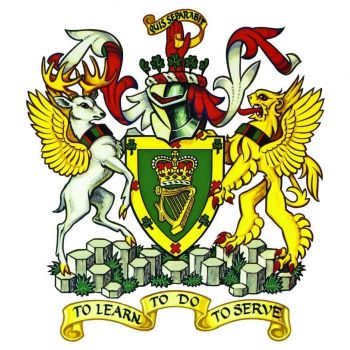 Arms : Vert an Harp Or ensigned by a Royal Crown with its cap proper a Bordure Or charged with four shamrocks slipped Vert. And as many saltires couped Gules.
Crest: Upon a helm with a wreath Argent & Gules within a circlet of Shamrocks slipped and conjoined Vert a Dexter Hand couped at the wrist Gules holding between the thumb and first finger a Scroll flowing to the sinister and reversed over the hand Or thereon the motto Quis Seperabit in letters sable.
Mantled: Gules doubled Argent
Supporters: On the dexter side an Irish Elk argent winged armed and unguled Or and on the sinister side a Winged Lion Or both gorged with a collar of the Colours of the Police Federation for Northern Ireland (videlicet Holly green Crimson and Black) proper standing on a compartment composed of pentagonal Rocks of varying heights interspersed with Tufts of Grass proper

The arms were officially granted in 1986.

If you have any information on these arms Federation for Northern Ireland mail us !