From Heraldry of the World
Your site history : Pontifical English College
Jump to navigation Jump to search 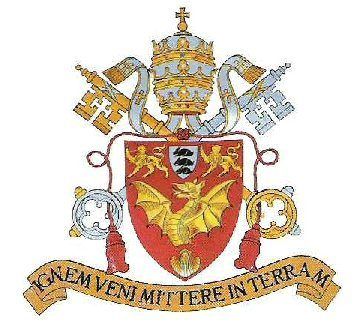 Gules, a demi-dragon or, between in chief an escutcheon argent, charged with three hares couchant in pale sable, accompanied by two leopards of England of the second, and in base a gold escallop. The timbre is composed of the keys of S. Peter in saltire surmounted by the Papal tiara, and the motto is "Ignem Veni Mittere in Terram".

The arms were officially granted on August 3, 1951.

The scallop is the traditional symbol of pilgrimage. This was because the college started life as a hospice welcoming pilgrims to Rome beginning from the Holy Year of 1350. By 1362 John and Alice Shepherd, who owned the original house, had founded a formal guild and transferred their property to the 'Hospice of St Thomas'.

In the centre of the shield is a winged dragon, this is taken from the personal arms of Pope Gregory XIII. It was the Pope who co-founded the college in 1579 along with Cardinal Allen. The hospice had become a shelter for English priests who had escaped persecution at home, and so the hospice became a priests' seminary.

At the top of the shield would have been three leopards (lions), the traditional heraldic symbol of England. The central one however has been defaced with a silver shield and three black hares. This is the personal coat of arms of Cardinal William Allen, the other co-founder of the college.

The Motto of the college is "I come to bring fire to the earth" from the Gospel of St. Luke. The motto also links the achievement with the oldest known device of the hospice, the Eternal Father with Christ Crucified and the Dove of the Holy Spirit, both being found on an altarpiece in the college chapel by Durante Alberti (c. 1580).

Literature : Image and information send to me by Rev. Liam Bradley; Goodall, 1955