From Heraldry of the World
Your site history : Port of Launceston Authority
Jump to navigation Jump to search 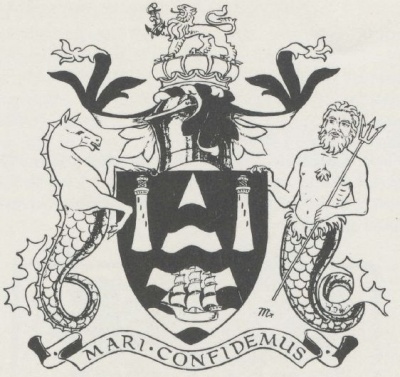 Arms : Vert, on a Pile reversed Barry wavy of eight Argent and Azure, a three-masted Ship in full sail proper, flags flying Gules, in either flank a Lighthouse proper.
Crest : On a Wreath of the Colours, on a Mercantile Crown Or, a Lion passant Gules, holding aloft in the dexter paw an Anchor Azure fouled.
Supporters: On the dexter side a Seahorse, and on the sinister side a Triton, both proper, the Triton holding in the exterior hand a Trident.
Motto: 'Mari Confidemus'

The Arms represent a ship entering, with proper safeguards, the River Tamar in the green land of Tasmania.

The Supporters are similarly of a marine nature, and the mercantile crown and anchor in the Crest represent sea trade. The lion here is similar to that in the Tasmanian quarter of the Arms of the Commonwealth of Australia.