From Heraldry of the World
Your site history : Portman Building Society
Jump to navigation Jump to search 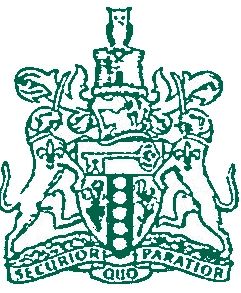 Arms: Argent, on a pale sable between a thrift plant with two flowers and a sprig of oak slipped leaved and fructed proper, five bezants; on a chief azure a key wards to the dexter and downward, Or.
Crest: On a wreath of the colours, A port between two towers, the portcullis raised, proper, astride the battlements an owl Or.
Supporters: On either side a talbot argent, collared azure, charged on the shoulder with a fleur-de-lis and in the mouth a quill also Or.
Motto: Securior quo paratior

The arms were officially granted on February 5, 1964.